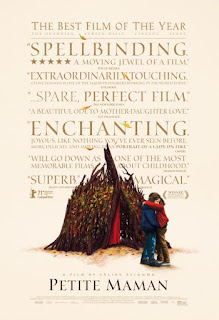 This is a very interesting film for those willing to peel back the layers of what's going on. On the face of it, it's a twee French story about two girls who meet in the woods one day as one of them has travelled to her mother's childhood home to clear the house after her mother, the girl's grandmother has died in a care home locally.
It's the work of Céline Sciamma (Portrait of a Lady on Fire, Tomboy) who directs and pens the tale which I really can't say much about for fear of delivering spoilers. There are some reveals about halfway through this very short film where the viewer can either decide to take the story on face value, or start to unpeel the layers of discovery.
The two eight year old girls appear to be unknown French actors with no previous work and the same last name - it is thought maybe twins. Joséphine and Gabrielle Sanz, Nelly and Marion. They're very cute and clearly inexperienced, but this didn't detract from generally very good performances. Nina Meurisse and Stéphane Varupenne support well enough as mum and dad but the girls are the stars of the show.
Hard to know where to go from there without giving much away, so I'd encourage you to just watch it, enjoy and see what you get from it. If you don't want to uncover the cryptic meaning of everything going on then you can enjoy a simple tale alongside the lovely cinematography, scenery and dialogue. There's humour in there too between Nelly and her dad particularly, with two or three scenes with laugh-out-loud events.
The two girls have a chemistry too, with various charming, poignant and and endearing scenes. There's often limited dialogue as the viewer is encouraged to get alongside the girls and experience what they have in this pocket of time together before Nelly is whisked away back home again. Watch how the adults interact with the two girls as well, to give some clues! That's it. I've said enough! I watched in via streaming on Mubi in the UK.