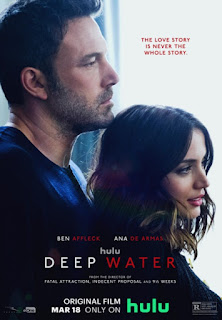 This Amazon project was on my radar for two reasons. I'm guessing you can work out the first - the adorable Ana de Armas in action in an erotic thriller(!) but also that this is an adaptation of another of Patricia Highsmith's novels, which I've spoken about before and always seem to come up trumps.
I previously admired her work here in my blog in the shape of the excellent Carol (2015) starring Cate Blanchett and Rooney Mara, the Hitchcock delight Strangers on a Train (1951) and the 2014 thriller The Two Faces of January. Fabulous storytelling made into generally excellent films - and this is no exception.
There's a rich couple who live in a posh house with their daughter, living a privileged existence but within a strange marriage setup. They love each other deeply but Miranda, the wife, is hot-blooded and passionate, wanting to live life to the full whilst Vic, the husband, is very traditional and conservative in expectation. Miranda takes lovers and although deeply stressed and jealous, Vic goes along with her behaviour because he so deeply loves her (and knows she does, him) and has no intention of any talk of divorce. The arrangements work for her and he is able to tolerate things.
The two or three men we know about in the confines of our story presented in this film have mysteriously disappeared one by one, or in one case drowned in front of a gathered group. There are parties after parties going on - Vic and Miranda have a rich and full social life with an extended group of friends. Suspicions are raised regarding the men leaving the scene but although Vic teases about having bumped them off, few take him seriously and certainly Miranda doesn't entertain it as she knows that he has no passion in him to consider the option.
Ana de Armas is excellent (and we see plenty of her) in the lead but Ben Affleck plays Vic charmingly. He's cool, calm and collected and gives off an air of self-control and measured response, always apparently doing the right thing to keep things afloat. I really didn't think he'd be the right person for the role, but he does indeed pull it off! The daughter Trixie is played by Grace Jenkins and is cute, engaging and perfect for the cheeky role.
The story becomes complex in the hands of Highsmith with regular injections of humour and shock. I really enjoyed it and shall refrain from giving anything more of the plot away here so that you can tune in and see how it evolves. It's steamy and erotic in places, cold and calculated in some, whilst warm and engaging elsewhere.
The film has got mixed reviews out there so depending where you see those you might be swayed either way. Good idea to watch it for yourself and make up your own mind. I give a thumbs-up here as I found it thoroughly entertaining and the time flew.