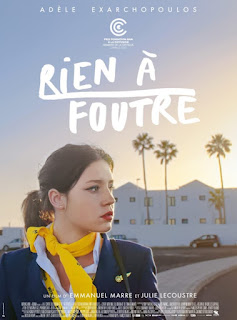 It seems that titles of films are becoming looser as time goes on and here's an example! It's a 2021 French film which borders on a documentary really and almost the whole 2 hours is shot with hand-held camera.
It's the story of an air stewardess who's a young plucky thing trying to negotiate the start of her career following the death of her mother. It gives an insight (who knows how accurately) of the lack of glamour for people in that position heading off to see all parts of Europe in their working life (with a fictitious airline company, but low-budget, like EasyJet or similar).
Adèle Exarchopoulos (most famously baring all - and a bit more - in Blue is the Warmest Colour) stars in the leading role - and is in pretty much every frame of the film. She does a very good job portraying the lifestyle of a young girl in that position. She shows how the character relieves the pressures of the job socially when she can, tries hard to do what is expected of her when at work and highlights some of the (apparent) unfairness of the hiring, retention and firing of staff in the industry.
We get an insight into how hard it is for someone in that position to deal appropriately with difficult customers, apply compassion when needed to help people out, even when the pressures from above come down heavily at the merest sniff of someone humanely bending the rules.
It also highlights the industry pecking-order for people in her position trying to make a successful career and how the goal seems to be to head for the money of Dubai and work for some of the more glamourous middle-east airlines instead of budget ones she has had to settle for in Europe. Again, no idea if this is the case or not.
I don't know the directors, Julie Lecoustre and Emmanuel Marre, who seem relatively unknown, nor any of the other actors - it looks like the budget was spent on the star's salary. There's lots of French with subtitles but also plenty of English without, as you'd imagine.
There's not much drama here, though about 75% of the way through she does head off back to the family home and we get an insight in the mother's death and the impact that has had on her sister and father. It's also a tale of hope as through all the difficulties she encounters, there is a light at the end of the tunnel for her.
If you want to see this you'll have to take out a 7 day free trial at the moment with MUBI (an Amazon Prime Video bolt-on) but I'm sure it'll be more widely available soon. Not exactly gripping viewing, but interesting docu-drama with some good insights.