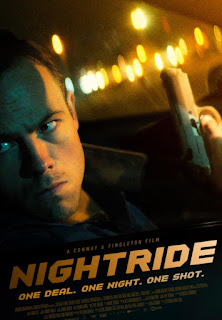 Nightride is a real-time one-shot thriller as we join an intimate portrait of a man trying to do one last drug-dealing job in Northern Ireland before he goes straight, planning a less stressful life with his Ukrainian lady. It's a white-knuckle ride in the night. A nightride!
Some will have seen the Tom Hardy film Locke a couple of years back where a very similar approach had been taken in terms of shooting a (relatively) low-budget thriller using dialogue, intrigue, suspense and the threads of a strong storyline to snag the viewer. Here, director Stephen Fingleton (The Survivalist) shoots the whole film in one take, start to finish. Thoughts of Sam Mendes' 1917 come to mind with similar ambition but here, we're dealing with a much more dangerous potential outcome in the criminal underbelly of people on the wrong side of the tracks.
Moe Dunford (Dublin Murders, Vikings) plays Budge, the lead character, up against the clock in near real-time as he races around Belfast pulling together the activities of his team, watching out for the authorities, dealing with a tail, problem-solving on-the-fly when things go wrong and people let him down as he tries so hard to get the drugs from the seller to the buyer, collecting cash and moving it all around.
It does turn into a thrilling ride as the camera for a lot of the time is attached to the bonnet of his car and the audience lives the stresses and anxiety that he goes through, one minute thinking about giving up with nothing going right for him (and accepting that he's for the 'whack') and the next, with a new opportunity and path opening up to get him out of the mess he's in.
The nastiness of these criminals is on display throughout with human life secondary to the business of making money and saving face. There's an unseen but ruthless-sounding Mr Big character called Joe (voiced by Stephen Rea) who we hear via phone calls. He's willing to unleash his Rottweiler Troy to do his dirty-work at the drop of a hat if anyone crosses him or threatens his objectives. Budge is living on the edge and relying on his instinct and good decisions to save his skin.
It's real edge-of-the-seat stuff as the viewer get onside with Budge, willing him to win out regardless of the criminal activity he's involved in, a bit like getting onside with Walt White doing very wrong things in a world of other people doing very wrong things in Breaking Bad. Watching the events play out really is a thrill-ride and it's a film very well made. The single-take experiment actually comes off because the material and execution is so well done. As I write, it's available on Netflix in the UK.