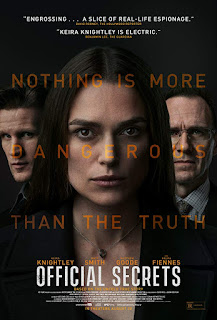 I was looking forward to seeing this one, a slice of history that, for once, I had been alive to understand more the context and complexity regarding. It didn't let me down and I was pleased that Keira Knightley grasped the lead with gusto.

When I see the name Keira Knightley my mind, maybe unfairly, conjures up Pirates of the Caribbean. She's been in many more serious and stretching roles of course, but this seemed to have set the framework for me. So yes, The Imitation Game, Atonement and Pride & Prejudice - but not before have I seen her excel and convincingly lead. She plays Katharine Gun in this true story, as a GCHQ employee who, although having signed the Official Secrets Act to get a job there, felt morally obliged to leak a secret document to the press in order to prevent massive loss of life in Iraq in 2003.

As usual with film adaptations, we're never really quite sure what liberty is taken with the truth but from what I can remember and reports I have seen, it's pretty faithful and in keeping in theme with the excellent Red Joan. In the final scene, much like with Red Joan, they even used footage of the real person around the court in London as things reached a climax. So, yes, a whistleblower was she, but because of the context of what was going on, gained support for her plight in defending her actions and exposing the Blair/Bush activity and the dubious actions of their senior staff.

The whole cast performs excellently, particularly Ralph Fiennes as her lawyer along with many good and strong British actors. Dr Who's Matt Smith plays the journalist chasing the story well and Rhys Ifans doing similar work across the pond.

It's a bit of a slow-burner at times as they key players wait for the wheels of justice to turn and various people await their fate, including Katharine's Turkish husband fighting against unfair deportation. Director Gavin Hood (Eye in the Sky) doesn't let up with the tension however and keeps the audience glued to the screen, slow or not. The sets are nicely arranged and supporting photography and positioning thoughtful enough to make for interesting visuals.

I really enjoyed it and the near-two hours flew by whilst watching. I always like a true story - it adds a certain element to films when executed well, as it has been here. It's also a little-person against the power of the establishment story, when the moral stand of the former is absolutely right, but the procedures, politics and safety concerns for the masses is questionable at best. Recommended very much for those, like me, who pretty much remember all this going on, but also for those who want to see the maturing Keira Knightley doing some real acting.
- November 22, 2019