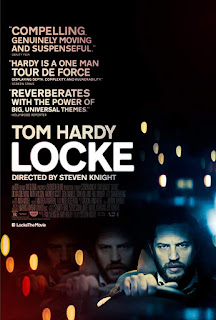 Steve Litchfield mentioned this little film almost exactly a year ago on Projector Room and I just saw it pop up on Film 4 the other day, so gave it a go.

It has to be the lowest budget film ever made! Hire a BMW and Tom Hardy, pay Olivia Colman, our Fleabag friend Andrew Scott and Ruth Wilson for voice-parts, get Hardy to drive down the motorway and film him in the car talking - almost in real-time! It really could easily be a radio production - or even just be broadcast as-is via radio.

Of course, the strength of this film is in the script, story and dialogue between Hardy's character and those various bods on the other end of his carphone. The world is closing in on him as he tries to do the right thing by a woman he has got pregnant at the potential cost to him of losing everything else in his life. The question is, will that happen - or will he smartly piece together the puzzle which he needs to shuffle and sort out to keep everyone happy and find solutions.

It's taut and claustrophobic and Hardy very well executes the range of emotions, anxieties and frustration that one might expect to see given the situation.

And that's about it really. Well executed and writer/director Stephen Knight keeps you watching 'til the end.
at November 28, 2019