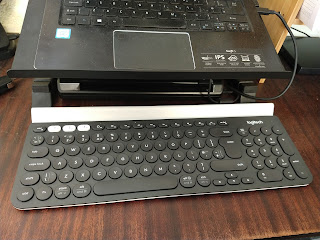 Logitech make some lovely keyboards. I type on one of them now - the K380, which I use remotely as it's smaller - and which I've covered on Whatever Works before. I also covered the K480 which had a phone/tablet stand built-in but not this latest addition, the K780.

The Logitech K780 is a bigger keyboard, more suited to a permanent position as it improves on the lighter, more portable versions in a number of ways. First impression is the weighty bulk, substantial heft of the unit. The rubber feet ensure that it ain't going to move once in place unless you're in an earthquake zone! The scissor-keys are beautifully designed, round, like the rest of the 'K' Logitech family, slightly 'reverse-domed' or concave which match the end of fingers! A fiendish idea, eh! And, they're all-but silent in use - no clacking like a 1945 typewriter! This, being the big-brother of the family also has amazingly good spacing between the keys and also a dedicated number pad off to the right, missing in so many more dinky keyboards of course. 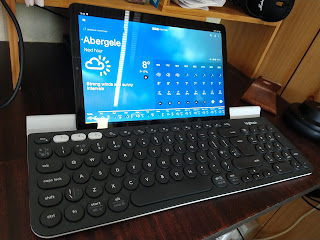 There are no 'risers' at the back, so the angle presented is the one you get, to ensure that anything placed in the solid rubber tray is not in danger of tipping forward. Fortunately, the angle has been well thought out and is just right - for me, anyway. The keyboard part of the structure is black and is stylishly attached to the grey/white lower portion which sweeps underneath and back, to form that rubber tray. Underneath, central, and to the back is the slide-open door for the two AAA batteries (which Logitech claim will last 2 years) and the Unifying USB-A plug to put into your device that the keyboard is serving, should you not want to use Bluetooth.

It all feels very well made, solid, heavy, firm and substantial. The rubber tray at the back is good for a tablet in landscape plus a phone, or even three devices maybe in portrait - as there are, like the rest of the family, provision for 3 fast-switch buttons. These work faultlessly as tested here, on-the-fly dancing between various devices - even between Bluetooth and USB wireless (2.4GHz). Just press the assigned button and as if by magic you're typing on the other device. I have my laptop connected via USB and tablet and phone via Bluetooth.

There's also software to download called Logitech Options (prompted at first use) which runs in the background on the Windows PC (and Mac, apparently) and offers further control over the shortcuts and keys, various functions and default assignation for various control-based keys to suit the user, and a backup of settings to Logitech's Cloud if you fancy using it! Incidentally, various control-keys on the keyboard itself are 'split' for multi-OS use. It also flags up on-screen when the battery is low, though I'll have to wait 2 years to see that!

There's an on/off button slider-switch on the side, but things seem to power-down nicely without that used - then power-up after a tap of any key (though actually, there does seem to be a slight delay there as once or twice I've been typing away and after a few seconds it seems to 'buffer' and catch up with me - so maybe not instantaneous - though this only happens after 'sleep' and not switching between devices). If you want to get invested in the Logitech system you can also use various peripherals (like a mouse) to use the same Unifying dongle thingie - as well as buying the dongle separately, but I haven't fully investigated the breadth and implications of this wider system.

It's a super keyboard. I've been nothing but impressed with this range over the years - and this more 'static' addition sets up my 'office' desk nicely. The usefulness of the dedicated number-pad can't be overstated for some of us who work with numbers and spreadsheets, accounts and figures. As you may have gathered by now, this is not a keyboard for the Road Warrior, but for home use, I highly recommend it. I picked it up for £49 at AmazonUK but note that the price seems to fluctuate between retailers and time, so shop around!
- March 13, 2020