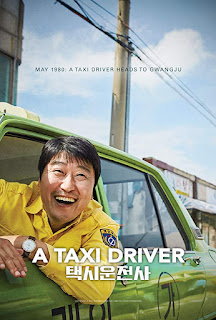 We continue to enjoy rich and entertaining film creations from the far east, regardless of what buffoonery is said in Washing DC! This is another South Korean peach from 2017, come to light here as it stars Song Kang-ho who played dad in Parasite. A Taxi Driver is a moving and eye-opening film which you must see.

Song Kang-ho (or Kang-ho Song if you'd rather) plays the titular Taxi Driver based in Seoul during the Gwangju Uprising as the people of Gwangju took up arms against the soldiers deployed as a part of the martial law imposed. The troops started shooting and killing university students who were staging demonstrations against the coup in 1980. Follow the link above to find out more. The story builds around the backdrop described above and seems to have a fair amount based in fact, but has certainly been fictionalised to a degree for the purposes of this drama. The two key characters certainly did exist.

Back in Seoul, our taxi driver Kim is finding it hard to scrape a living to support his small daughter after his wife had died of cancer. He happens upon a job of a lifetime to earn some real money transporting a German journalist from Seoul to the chaos in Gwangju, the best part of 200 miles away. The journalist Jürgen Hinzpeter can't speak a word of Korean, nor Kim, much English. The German is played ably by Thomas Kretschmann (Dragged Across Concrete, The Windermere Children) but without much personality or enthusiasm. Maybe that's what the real bloke was like!

The film, up to now, has been a near comic affair with our main player bouncing off the characters around him humorously and with much laughter and fun. The scrapes he gets into getting the job in the first place, liaising with other taxi drivers and muddling through life with his daughter - it feels like it's shaping up into a light comedy. But then the journey starts.

The government troops have blockaded Gwangju, so by the time they get there, they have had to face many run-ins with the forces as they try to find a way into the city via country lanes, keeping their wits about them. When they get there, the film takes a sudden turn for the not-so comic as the viewer is offered many harrowing scenes on the streets as the troops open fire on the protesting students first then the people of the city rising up to support the students. Our central pair hook up with some local taxi drivers there as they try to battle their way through and the story becomes very much about a race to get the footage of the massacre filmed by the journalist back to Seoul and on a flight to Japan, so that he can expose the truth of what was happening in South Korea into the world's news feeds. This was 1980, don't forget, so long before live-feeds and satellite hook-ups. The footage was physically in reels in his bag. He had to get them out.

This is the point at which we start to see the quality acting, as Song demonstrates courage in amongst the angst he feels, fighting to do the right thing by the people being abused, but also protecting his daughter and not leaving her a penniless orphan. He handles that moral dilemma excellently and the tension builds up as we head towards the climax and outcome. In the post-credits there's a poignant interview with one of the real people involved in the incident and film, which makes the whole outing moving and real.

The shooting and direction is executed beautifully as we enjoy the Korean countryside, the chaos on the streets, chases through the lower-class inner-city housing complexes and juxtaposition of taxis and cars in various scenes. The director Hun Jang is relatively unknown, so no Bong Joon Ho, but does a good job pulling things together. The cast all do well and once again, there's much to be learnt about the culture and customs of the South Korean people. It's such a rich experience, educational - at least in part, very different from Parasite in so many ways, but equally as engaging and enjoyable to watch on many levels. Currently doing the rounds on Film4 so catch it when you can as the DVD is pretty hard to source. Recommended.
- March 03, 2020