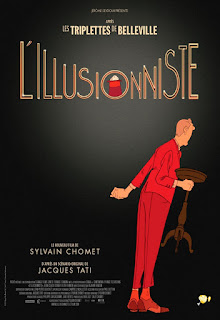 Director, writer, animator and all-round talent Sylvain Chomet was only really on my radar because of the mime-orientated segment Tour Eiffel contributed to the beautifully crafted anthology piece Paris, je t'aime. I'll come to that another day. For now, I wanted to enjoy L'illusionniste again and am very pleased that I took the time.

In English known as The Illusionist and not to be confused with the Edward Norton mystery drama from 2006, this animation is a pure delight. I have been watching a number of animated features lately, some from Studio Ghibli and it's great to see the art form continuing without the need for big-bucks Hollywood agendas.

L'illusionniste is a story about, not surprisingly, an illusionist. The film is based on an unproduced script written by French mime, director and actor Jacques Tati in 1956. Made in 2010 but set in 1950's France, England and Scotland, we follow the path of our central character as he tries hard to find work with his simple stage act, whilst all around him, the landscape of stage acts, performance and theatre shifts and changes for a more modern world.

He leaves Paris, flunks a contract in London and takes a long journey to an offshore Scottish Island, before settling into Edinburgh's Music Hall and Theatre scene with a young female fan in tow, collected by accident on the island. He takes rooms in a run-down hotel amongst (and run by) actors, artists and performers all trying to find work and to put a foot in the door of modern life and demands.

The artwork is quite magical with very little dialogue from anyone, a throwback to near-silent film, reflecting the theme depicting new and old entertainment. Every frame is a work of art - there's so much going on in every scene, in every corner of every frame, that to digest it properly requires repeated viewings. Attention to detail to introduce interesting asides, characters, items around the scenes - which most people would miss on one viewing - reflect the time and effort, not only in the making of the animation but also imagining so many ideas and having an insight into what could well be going on in any given street or social setting.

It's often funny, sometimes sad, always stylish but also moving as the story expands and heads towards its conclusion with insights into the post-1950's era of shifted public expectation regarding entertainment and the demise of many old fashioned artists. The pairing of the young girl, getting ready for a life in the times ahead - and the older performer winding down, reflects a clear division of the theme and is used throughout to paint the picture.

The music is always appropriate to the scene, floating between Music Hall pomp to orchestral to rock'n'roll and much between. Very often the haunting sounds of solo piano are at the forefront in the more reflective and poignant scenes. I don't think anyone providing the voices, where there is very brief grunts/dialogue, are in any way famous and the thrust here is clearly the writing, script, direction, story and animation. All of which are a delight. Has to be seen to be appreciated of course - but I can't think that anyone would be disappointed investing their 80 minutes. Highly recommended. Next stop, Les triplettes de Belleville!
- May 12, 2019