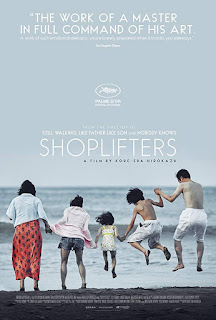 The original title of this 2018 Japanese film from unknown to me (I need educating) director Hirokazu Koreeda is Manbiki kazoku. It's an odd tale about a group of people who are initially presented as a family living together in a poverty-stricken area of a Japanese city.

The group leap from opportunity to opportunity in terms of income and work - and when they can't, some of them at least turn to shoplifting to get by. But before we get there, we're given an insight, very early on, as to how the unit membership works when they find an abandoned little girl, who they take pity on, take in, make no attempt to tell the authorities or find a family - and in the end, start trainer her too in the craft of shoplifting!

It's quite hard to describe or review this film without a couple of spoilers, but I don't think it matters as the viewing experience is much more about understanding the underlying messages than just the storyline. So if you'd rather watch it first, stop here - be but be assured that it's an excellent film and well worth seeking out!

Quite early on in the film, we get to realise that the group are really not a family after all, and that the film is asking questions about that throughout, challenging the viewer's concept of what a family is and whether or not people living in a group need to be related. The grandma of the group has a pension, but we find out later that she's as much on-the-make as those out there shoplifting - which is a switch for the viewer who is led to believe that the grandma figure is actually the one with the values, standards and morals!

As the story unfolds and events take place, we begin to analyse the motivation of the group, how their loyalties to each other work, including towards an incoming new member and why they have taken up shoplifting - hailing it amongst themselves as a reasonable career path in the centre of all this poverty. The narrative touches on the effect on the shopkeepers who lose out, with ruthless attitude as long as it's short of bankruptcy. The group work hard, as a team, to survive with challenges along the way - at one point the father-figure damages his foot at work but is unable to claim compensation. They need to shift their behaviour in order to compensate themselves instead.

We discover that each of the group have a back-story which has led them to this situation, often from within damaging relationships and situations. There's something being said there again about family life, what family is in relation to society's expectations and asking the question about validity of social norms. And then there's death to be dealt with. We discover how the group deals with death when they don't have the means to pay for a funeral and end up breaking the law to find a solution.

Eventually, the little girl is spotted, the law-breaking catches up with them and we enter the most powerfully acted part of the film in the last 20 minutes when the police are interrogating each of the surviving group in turn. We can now see how well these actors portray the anxiety involved for the characters and the rationale of how they explain their actions and life choices. Significantly, at the end of the film, even then, the family club together to dictate an outcome which makes the most of their situation, minimising the impact on the group.

It's a quite excellent film and it has much to say about society, poverty, how human beings adapt to their surroundings and previous experience, keeping their heads above water. It's very much about the family unit and what that means, challenging us all about our expectations therein. I'm sure that I've come away from the viewing missing some of the points being made, so I'll have to watch it again - but that really will be a delight rather than a chore.

It's shot beautifully. The sets are claustrophobic, streets natural and all the actors (of whom I'm afraid that I don't know any - more learning for me) play their parts expertly. It's clearly in Japanese and I watched with subtitles, but there are dubbed versions for those who prefer. Highly recommended.
- May 09, 2019