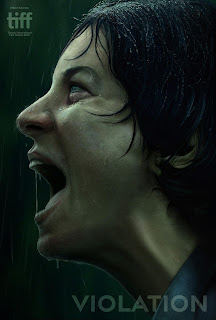 Blimey! Hold onto your hats here for this Canadian arthouse, horror, thriller of a film! It's a film about two sisters who live each side of The Pond. One visits the other with her husband and spends time with her sister and her husband in a very remote location where nobody can hear anyone scream!

Feelings of jealousy arise from childhood days, some in flashback, then following an incident with her sister's husband, first sister (the fruitloop) has the perfect opportunity to exact revenge. This is not for the lily-livered as there's a lot of gruesome violence and graphic nudity. I had to look away at one point - think Shallow Grave mixed with Dahmer!

I think I'll now leave it to those who can tune into the Shudder channel to give it a go if I've not put you off! There's an annoying amount of handheld camera in use as the clear low-budget masquerades as arthouse with a great deal of attempts at artistic imagery and timeline jumping, some of which lands well, much not. It takes a long time to get going and for anything to happen but when it happens, it happens!

Directed, written by and starring Madeleine Sims-Fewer alongside Dusty Mancinelli it also features Anna Maguire, Jesse LaVercombe and Obi Abili making up the foursome. The actors seem to have a background in lots of TV work and short films but certainly the two sisters, Sims-Fewer and Maguire play it very well and convincingly.

This is something very different indeed, not horror in the spook sense, but horrific in terms of what people can do to others when driven so strongly to revenge. Or maybe real people can't! (You can get to the Shudder channel via subscription at AmazonUK or at shudder dot com.) You have been warned!