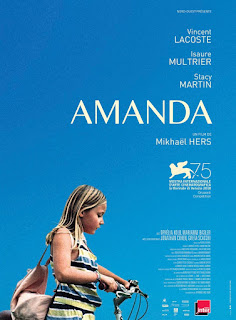 Here's another one that the French seem to just nail, more times than not. A warm drama about family, family responsibility and the power of blood being thicker than water.

David's sister is killed in a terrorist attack in Paris and leaves her 7 year-old daughter in the lurch. David is close to his sister and her daughter so is the natural choice as Guardian.

But he has a life too, a new relationship blooming and grandparents/in-laws to deal with and take into account. Amanda is the little girl, played by the 10 year old (at the time) Isaure Multrier. She seems to leap between acting really well in the role at certain times, but becomes wooden, demonstrating inexperience and youth at others. I hope she continues as she's a charming and pretty girl in an ordinary type of way.

Directed by the similarly not-too-experienced Mikhaël Hers, the photography and command of scene is thoughtfully executed, not afraid to long-linger to capture a mood where appropriate to do so. Much silence is adopted in support rather than sloppy music!

Vincent Lacoste plays David in the other lead role and pulls it off beautifully. Young and spritely, but inexperienced in the ways of the world, having to face a real grown-up dilemma and bunch of choices. He does this well, throughout.

There are some threads left open at the end which I saw as significant in terms of 'life being like that'. The two main players watch tennis and during the game they both came to the realisation that life goes on, there may be turning points, fun and sadness along the way, but we just have to get on with it.

A real gentle drama with some funny bits thrown in and love present - and in the making - but mostly it's about family ties and bonding. Well worth a look as it does the rounds on Film4 in the UK.