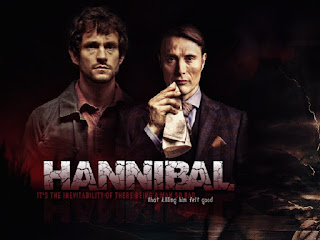 Much like the Thomas Harris originated story-turned-film, Hannibal the TV Series currently showing on Netflix in the UK, is a mix of gore and dark nastiness delivered almost completely tongue-in-cheek! "Whenever feasible, one should always try to eat the rude."

This reforming of the books and films turns the thing largely on its head, placing Hannibal, yes, in his earlier days - long before the setting in the books and films - as a practicing psychiatrist, going about his dark activities but right under the nose of Will Graham and the FBI, assisting them with trying to catch a serial killer on the loose. There was no indication in the books or films about this kind of relationship between the characters early on, just the cannibal Hannibal preying on the likes of the young Mason Verger et al luring them into his lethal playground of self-amusement!

The irony is that for a large part of the proceedings, it's actually Will Graham who ends up in the cage and Hannibal outside, with Will trying to convince everyone around him that Hannibal has framed him into being incarcerated and that the respected FBI helping hand is actually the monster. Speaking of the cage, the show makers have had great fun with the sets - building on the sinister interiors for fun by introducing what, at times, comes across more like a medieval torture house!

It's gory and bloody throughout with the killer creating scenarios in keeping with a Francis Bacon painting - and indeed straight out of the books and films - but never really scary or how I would describe Horror, though Netflix seem to want to categorise it that way! This is a not a new show, out there between 2013-2015, it's just that I only just got round to seeing it. It's typical American TV packaging with 39 episodes across three series, each about 40/45 minutes.

The English actor Hugh Dancy takes one of the two leads as Will Graham and is annoyingly irritating as he camps up the role, half of the time floating off into some fantasy world, peppered with apparent mental illness as he executes his 'gift' of analysing a crime scene, much like he did in, particularly, Manhunter. In that film, and indeed the books, he had presented as in-control however, not lost and out of control. The way that his role here was written is odd and not in keeping with Harris' original vision. But then, as I say, everyone here seems to be having a laugh with the genre and material anyway. There are laugh-out-loud moments as it sometimes dips into the ludicrous!

The Danish actor Mads Mikkelsen takes the other lead and although he brings his own look and feel to the role of Hannibal, it's not quite Anthony Hopkins (even when he was taking it seriously!) or even Brian Cox. He's not very convincing, sinister or dark enough. There's no magic ingredient seen when you look into his eyes - unlike the others - he just looks like an ordinary nice bloke. Some of that might be down to the quality of photography and direction, I guess, which in turn, might be down to the fact that a range of 12 people took the task across the 39 shows! At least he has a foreign accent, like the original Hannibal might well have had, coming from Lithuania!

Laurence Fishburne plays Jack Crawford and, like Will's adjustments, is depicted as being far too ordinarily human and involved, compared to the original stories. At every crime scene, involved directly with Hannibal and mixed up far too closely in the action. It was interesting to see the development of the storyline concerning his wife and his difficult homelife, which is not really covered very much in the original stories. There's also a confused Clarice Starling character in the mix who Hannibal seems to like but not nearly enough, as he did Clarice. I won't give too much away in case you want to live through the twists yourself!

Nods, left right and centre to, particularly, the films, the last two of which were certainly enveloped with mirth. Lines used in the films/books reeled out again, often by the character who didn't actually originally say them! Catchphrases galore, gender-switching of some roles, like Freddie Lounds (Lara Jean Chorostecki) the Journo now being a female character - and Dr Alan Bloom now the female Alana Bloom, embellishment of quirks and character traits very strongly in the already-comic Dr Frederick Chilton (Raúl Esparza). To top all the fun off, we even have British comedian Eddie Izzard popping up in a confusing cross-role in which he appears to be part-Hannibal, part Multiple Miggs, part Paul Krendler, part new doctor-in-chains thrown/written in because he fancied being a part of it, maybe!

Don't get me wrong, it's all good fun. It's off at a tangent from the original books and films - and people like me who knew the books and films inside-out are treated to all sorts of nods and references to them throughout this. It's a mad mix of dark and nasty but also comic and humour. It's great entertainment for those willing to lay aside the expectation that it will continue in the vein of the originals or expect it to follow the same 'rules'. It's not a remake of any of it, it's an artistic extension and often very different production. Recommended for those approaching it in the right frame of mind!
at November 05, 2018