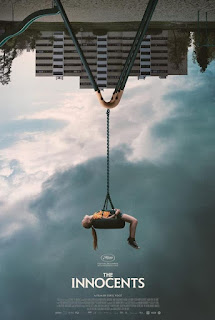 The Innocents is a Scandinavian film shot in the Norwegian language and is verging on being a horror, really. A pretty low-key horror, but that remains the best word to use I think. Created by the relatively inexperienced writer/director Eskil Vogt it certainly has plenty going for it and he has drawn the very best out of the young cast.
We join the story in a housing estate in a city where we dip into the lives of a bunch of children living in various apartments, blocks of flats. In the middle there's a playground where many of them spend much of their time. Our central family has two girls, one younger girl called Ida and her sister, who has autism, Anna. They live with mum and dad. Across the way, we have a young boy (Ben) who also lives with his mum and another little girl (Aisha) who lives with her mum. These make up the main characters.
The characters hang out together and Ben starts to show the others some 'magic' tricks, which verge on the supernatural. Things develop and it turns out that eventually, he's able to control events around him with his mind and starts to put that to use. Autistic Anna develops a connection with him and seems to have developed similar abilities, challenging his dominant position in the group. Ben is starting to do naughty stuff and Anna is trying to rein him back in, in their struggle. Before any of supernatural stuff started, we see Ben and Ida 'playing' together doing nasty things to animals, Ben leading, cruelty and violence the outcome.
Anna is unable to talk because of her condition, but this seems to rely on a connection also telepathically with Aisha where the latter 'leads' her speech, telling her what to say even though she's nowhere near her. So yes, there's a bunch of spooky kids starting to do a bunch of spooky things, leading to catastrophic events and acts of more violence. Ben gets more and more out of control, leading to one particularly shocking event, and only the presence of Anna seems to hold him back from being even worse.
Through all this, the viewer really warms to the kids' characters and wants to see the best outcomes for them, even though they are mostly twisted, supernatural and nasty! It's an intelligent horror film with similarities in some ways to the excellent 2008 film Let the Right One In. Smart, thoughtful, measured and well delivered, not relying on daft jump-scare moments.
The kids are really well picked for the roles and remain convincing throughout, particularly Rakel Lenora Fløttum in the lead as Ida. (Incidentally, she and her mum in the film, Ellen Dorrit Petersen are also real-life mum and daughter too.) Playing tricks with their faces, looks to camera, spooky eyes and smiles - they've clearly been well-coached and all come across very well. It's an excellent film which is now available on various streaming services in the UK and really is well worth tracking down.