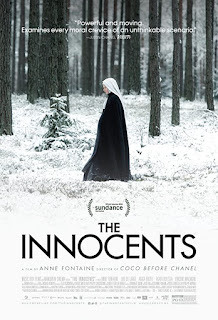 Actress, writer, director Anne Fontaine has created and been instrumental in some cracking projects during her career, including directing the excellent Coco Before Chanel in 2009, White as Snow in 2019 and writing/directing the much admired Adore from 2013. The Innocents which she directed in 2016 deals with a difficult story based on true events from Poland in 1945.
As Russian soldiers run riot in Europe at the end of WWII the focus of this story is a convent in Poland where the soldiers had been bursting in and raping the nuns. The film does not cover the period of time when this rampage was happening but starts off some months later as a number of the nuns are about to give birth. In desperation, one of their number seeks the help of Mathilde who happens to be working for the French Red Cross nearby helping the French soldiers recover from their ordeals as a result of being held in German POW camps.
Mathilde responds to the call and starts to help the nuns in any way she can. She's up against it, however, from several different directions as the Mother Superior doesn't want the news of what's happened to get out for fear of shame and rejection falling on her group. As the babies are born, she takes them away, telling the mother-nuns that the babies are being homed with good families. Furthermore, she's been sworn to secrecy by the same woman and has to find excuses to get away from her Red Cross duties without raising suspicion, especially from a doctor there who she's having a bit of a fling with.
Mathilde is played by the beautiful French actress Lou de Lâage (White as Snow, Breathe) who does an admirable job in depicting the controlled, passionate and driven medic. She plays the part in a passive way, reflective of her hands being tied behind her back for the aforementioned reasons with scarce resources at her disposal. The viewer is involved every step of the way as the story unfolds and events take place, dealing with the chaos of a convent full of pregnant nuns whilst protecting their position and dignity. The nuns are reluctant to be looked at initially, let alone touched, but Mathilde doing her best for them wins most of them round in the end as a relationship builds on mutual trust.
There are underlying themes playing throughout about life, the universe, (especially) religion (and the impact of the misguided actions of Mother Superior), belief and politics which reflect the diversity of characters, backgrounds and roles of those involved. There is much for them to struggle with too, as the values are clearly different for many, some religious who are re-thinking their blind obedience, some not, and those who are contemplating life and the meaning of existence especially at this time with all this going on around them.
The scenery, as it was in Pawlikowski's excellent Ida and Cold War, depicting a bleak, cold and inhospitable Polish winter is captured beautifully throughout and Fontaine has pulled the strings together very well to make this presentation a reflective one, rather than over-emotional tear-jerker. Agata Kulesza (Ida, Cold War), Joanna Kulig (Cold War), Vincent Macaigne and Anna Próchniak (Warsaw 44) all support admirably, demonstrating the fact that there's an awful lot to enjoy in Polish cinema, along with French, the best of both worlds shining through here. Highly recommended. Grab the DVD from AmazonUK.