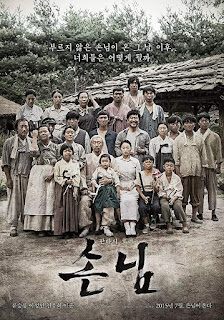 A quite bizarre Korean film written and directed by newcomer Kim Kwang-tae in 2015 is staged as a horror, but really isn't. Loose links to the traditional Pied Piper tale, as the central character is able to use his pipe to attract rats.

The story is set in a village, off any maps, following the Korean war. A widower and his son are walking to Seoul for treatment as the boy has lung disease. They happen upon the village and seek rest and refreshment for the night. The village Chief has an ongoing problem in that rats run riot (later gnawing on human bodies) and they can't get rid of them. Imagine his joy when, for the price of the value of a pig, the man offers a solution to rid the village of the rats for good.

The tale turns dark when the man has kept his end of the bargain and the rats have been removed but the villagers turn nasty as he's fallen for a local widow who's bonding with the son nicely and is threatening to leave the village for a life with them as new wife and mother. The village believe that she, however, is the one who brings luck and protection to the village. They then set out to ensure she stays with them with death, disaster, tragedy and darkness following. Revenge is nigh!

I really wouldn't call it a horror film, more like a dark fable with some nastiness but to be honest, it often verges on the comic! As the tale draws to a close it becomes darker and sad. It's a cracking watch and I really enjoyed it. Some of the acting is a bit dubious but the prize for best performances go to Woo-hee Chun playing the widow and Goo Seung-Hyeon as the boy. The boy plays the part very well indeed, leaping between mischief and victim with ease.

The set for the whole film is in the village, never wavering outside and adds to the claustrophobic nature of the proceedings, a technique often used in horror/terror films of course. There's some gore and special effects towards the end, too, but it's clear at this point that it's all very low-budget. It's all good fun, thrilling and my kind of 'horror' that doesn't purposely try and make you jump out of your skin. Recommended!
- September 10, 2019

Yes, a bit late to the party for this device which was released in autumn 2019 but I found out that these were still being sold direct from ... 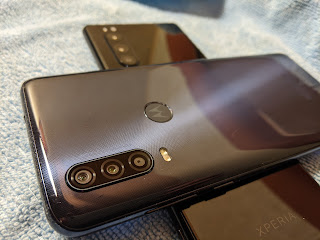