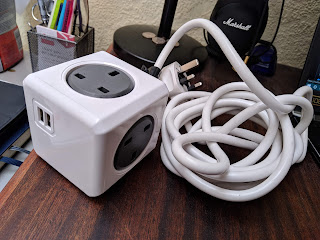 This is an attractive and useful little extension lead and multi-power socket which I've been meaning to post up for some time. It's very simple in many ways but has been thought out well with useful design and features.

Firstly, it's got a good 3M cable, which is reassuringly thick and heavy-duty looking. You can get a 1.5M version too, but as usual with AmazonUK pricing, it's more expensive! It comes with a 'dock' which, if you want to, you can attach to a tabletop (or whatever you can screw/stick it to with the supplied double-sided pads or screws) though when in use, this takes up one of the cube's 4 x 3-Pin UK plug sockets around the four faces.

The four sockets are arranged usefully in an offset fashion to allow for stupidly-shaped plugs and their attached bulk, which we've covered in Whatever Works many times, assigning to Room 101! However, if we can't change the behaviour of Chinese manufacturers standardising on plug orientation, this is next best thing. They don't, however, swivel, like we have seen on some other units recently. The payoff for that though is that it's very sturdy and made of extremely solid plastic, if strangely light.

On the 5th side (opposite to the sixth, which has the incoming power cord) are two USB-A ports which are rated 2.1A, so absolutely fine for charging stuff overnight and more. As you can see, it's about 3 inches cubed and is very handy. Currently about £20 at AmazonUK so yes, you can certainly do cheaper, but it is very good unit.
- February 12, 2019