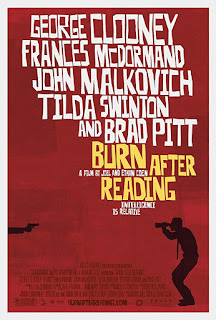 This comedy crime drama was delivered in 2008 by the Coen Brothers and is great fun! They've gathered their usual suspects to play the lead roles and it puts me very much in mind of O Brother, Where Art Thou.

John Malkovich plays Osbourne Cox, a CIA analyst who is hauled into his boss one day and told that because they consider that he has a drink problem, he's being demoted to a less responsible position. He tells them to shove it and resigns. He starts to write his memoirs. His wife Katie, played by Tilda Swinton is having an affair with George Clooney's Harry. Harry is also married to Sandy, but between them all, they really could be sleeping (or playing sex games) with pretty much anyone they know - or indeed just met!

Linda is played by Frances McDormand and she works in a gym with Chad, who's played by Brad Pitt. She is dissatisfied with her body and wants plastic surgery, but can't afford it. At this point, by chance, a CD falls out of the gym bag of an employee of a solicitor who's handling Katie's divorce on the hush. Linda and Chad look at the contents, make some assumptions about it being CIA information, rather than the memoirs of Osbourne and look to make a quick buck. Hope you're keeping up with this!

Before you know it, Linda's off to the Russian Embassy to try to sell what's on it, having failed, with Chad, to get money out of Osbourne - who's really confused as to who they are, what the CD is and how it's blackmail worthy anyway! He's also very, very angry and anyone who gets in his way usually gets a mouth full of abuse, deserved or not!

And so the farce goes on. It's beautifully stitched together and excellently delivered by the whole cast. McDormand steals the show with her amazing facial expressions, think Fargo, and naivety around the situation. Brad Pitt plays the half-brained half-interested buffoon perfectly, Tilda Swinton is excellent in her cold and clinical role, George Clooney creates characteristics for Harry which he can have great fun with, including a half-explored hypochondria and John Malkovich, as you'd expect, plays the irate Osbourne with gusto and relish! Everyone is clearly having great fun with the material and the story holds together nicely.

It's an absolute scream from start to finish, engaging and funny. It's quite dark in places but not grizzly. There's one scene where someone's having their head axed in, which should really have been a nasty head-turner, but the way it's delivered it just becomes comic, along with most of the rest of the film. The Coen Brothers really have turned out some fabulous films and this is up there with the best of the darkly comic ones. Don't miss it like I have for a decade!
- February 06, 2019