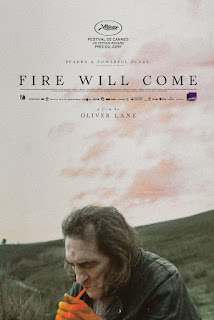 Galicia is an independent Spanish province in north-west Spain and the setting for this film set in a small community amongst the mountains and hills. French director Oliver Laxe takes the helm and produces something worthy of the many awards and accolades the film has received.
It's a real slow-burner of a film, the irony being that it is ultimately about wild fires and centred around a man who, two years before we join the story, had been put into jail for 'burning down a mountain'. Whether he was guilty of this or not we never find out, but two years later he arrives back at his mother's house to continue with their slow life.
A slow life which is about small-time farming with their three cows and small crop of vegetation, looking like they provide for themselves and a bit more to sell in order to pay their bills. Whilst Amador has been away in prison it is clear that his elderly mother, Benedicta, has struggled to make ends meet - continuing with the heavy workload on her own. She is pleased to see him back.
The local people clearly have the quiet Amador marked as their local criminal and try to avoid him, or when in contact, tease him. He tries hard to keep his head down and not seek conflict. He gains some warmth from a vet who comes to tend to one of the cows, who is an incomer to the area. Although she has heard about his history, remains apparently non-judgemental. The locals who remember, however, have it in for him especially when there is a new fire and one of them attacks him, even though there is no evidence that he is involved.
It was filmed in the Serra dos Ancares area of Galicia and many of the cast were local people and not professional actors. You wouldn't know, however, as they all demonstrate a level of competence which would not reflect the facts. Amador Arias plays Amador (with his own first name) and Benedicta (also playing under her own first name) is played by Benedicta Sánchez, neither of whom seem to have any track record at all of acting. They both do very well though and remain convincing throughout.
The film uses their own language, so it's subtitles time, but actually there is a distinct lack of dialogue throughout. The focus is much more on the movement of the characters, their daily routines, the work of the firefighters, burning landscape and wonderful scenery. The cinematography is excellent throughout, very artistic with lingering shots of a moody landscape, the valley often filled with haunting mists, wonderful lighting and loads of rain. But that's not all, as we're also offered apparently unnecessary shots of the characters in quiet moments, going about their lives, sleeping, smoking, sheltering from rain, thinking - wrapping us up into the characters and their lives.

There is oodles of atmosphere as we spend time with the mother and son in their dour cottage and around their smallholding. A real inside peek at ordinary rural life. It's very well produced and low-budget as it may be, has a gripping quality to it which makes the 90 minutes pass quickly - even though nothing much happens! This is no slick thriller on the streets of Paris but rather an arthouse meandering through country life and a peek into the culture of an area not often filmed. I must not forget the score and songs used, appropriately, throughout as that makes another enjoyable feature - including Leonard Cohen's Suzanne. I caught it on Mubi, but it's also out there on streaming services. Well worth a watch.