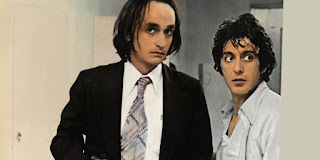 We all love a bank heist story/film and this has become a classic from 1975. Only 46 years later I've got round to watching it! It's based on the true story of John Wojtowicz who decided in 1972 to rob a bank with two of his friends. It could have been a simply told story but it has been lifted from the ordinary by the central performances.

The three of them are badly organised. They have little idea what they are doing, are flustered and nervous. One of the three turns tail at the door and leaves the other two to it! Al Pacino (The Godfather, The Irishman, Frankie and Johnny) and the late John Cazale (The Deerhunter, The Godfather) are the two, Pacino playing Sonny (John). Things start to go wrong.

Most of the money has been collected that very afternoon, so there's really not much left. Sonny tries to burn the evidence of their actions and presence there but the smoke gets out of control, a shop owner across the street see it and calls the police, despite being reassured by the manager at gunpoint. The police turn up alongside hoards of members of the public and the outside of the bank turns into a media circus as the press latch on too. The longer the film goes on, the more whipped up the media and the public gets, Sonny responding accordingly. He soon gets a mini-cult following.

The story then turns into a siege and hostage-holding drama. This is where the performances pick up and we get to know the characters. We come to know them more, know their back-stories and understand why they are doing this. Not only do the bank employees start to warm to them as people but the film's audience does too. It's almost as if the trust has grown between them all to such an extent that they are like a newly-formed family! Consideration given for toilet-breaks, help with moving furniture around as blockades and at one point even teaching one of the employees how to military-drill with a rifle!

The third main player is the lead employee, Sylvia played by Penelope Allen (The Thin Red Line, Bad Lieutenant). She gets alongside the two, rallies her colleagues, tries to keep morale high and negotiates with the robbers. It all gets very laid-back. They even start watching TV and ordering Pizzas. They see themselves on the TV and it feels like they are starting to consider this as a fun adventure rather than a life-threatening situation. They realise that these guys are amateurs and they can get alongside them.

Negotiations with the police continue throughout via an overweight detective outside trying his best, then latterly, an FBI agent. Sonny, who by this time is demonstrating that he's pretty street-wise and can see through any tricks they try, negotiates his way to the supply of a vehicle and aircraft and the story finishes in amongst the attempt to get out of the country. I won't say any more in case anyone reading this hasn't seen it apart from me!

Sidney Lumet (Deathtrap, Murder on the Orient Express, 12 Angry Men) is the director and plays beautifully with the situation, tension and characters, bringing the best out of the four or five main players. The set is mostly inside the bank and outside on the street, with flashes to Sonny's home now and again and that finale as they leave the scene.

There's a sub-plot going on regarding Sonny's sexuality, a wife, lover, informal secondary marriage and someone he knows who is looking for a gender reassignment. I won't say too much about that either to spoil the plot, but this has been handled sympathically as the USA comes out of the liberated 60's and into the 70's with prejudices and lingering conservative attitudes.

It's a great little film with so much more to enjoy than I have time to write about here. Almost every scene is a gem and repeated viewings will enable more insight and understanding. The strength here is in the powerful performances, especially from Pacino. He carries a story (which in places could go to sleep) into a moving but uplifting, always tense and riveting tale. Highly recommended.

The true story of this and Wojtowicz can be read at Wikipedia via this link.