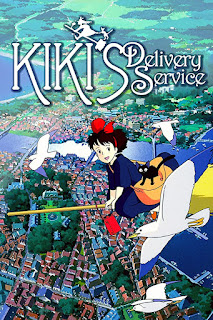 Thought I'd have another go at another Ghibli animation and chose this one. "Made in 1989 and written, produced, and directed by Hayao Miyazaki. The film tells the story of a young witch, Kiki, who moves to a new town and uses her flying ability to earn a living. According to Miyazaki, the movie portrays the gulf between independence and reliance in teenage Japanese girls. It was the first film released under a 15-year distribution partnership between The Walt Disney Company and Studio Ghibli and Buena Vista Home Video recorded an English dub in 1997 for which Kirsten Dunst voiced Kiki." Wiki.

Kiki is a witch and leaves home on her broomstick with her black cat (who she can talk with, but nobody else can) to head for the city to learn her craft. Or something! Not important. She stumbles into a kindly family who run a bakery and take her in, offering her accommodation in return for providing a delivery service (by air, of course) to their customers.

A young local lad is interested in her romantically and has a shared interest in flying, so he pursues her. They get into various scrapes while she's going about her business ending up with a great disaster which she and he have to club together regarding to save the day etc. In amongst all that she loses her powers because of a lack of confidence and has to fight to get them back climbing her personal mountain.

It's all good stuff, very cutesy and animation delightful with a French feel about it. The imagery is compelling throughout - a visual delight, with much thought put into landscapes, cityscapes from the air and angles. Very enjoyable and recommended. Maybe not as deep and meaningful as the likes of Spirited Away, but really nice to watch. Available on Netflix.
- April 13, 2020