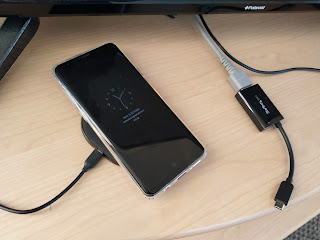 Well, I tried. Again! Samsung's Android interference is just too much for me. I shouldn't keep doing this, but I do. I never seem to learn, hate it and drive myself back to the clean purity of Pixel - or at least near-vanilla of the likes of Nokia, Motorola, Razer et al.

To be fair, I probably knew this when I bought the phone. What was driving me on was not the very good speakers (though not in the same class as the Razer), not the 128GB of built-in Storage, not the Qi Charging, not the 3.5mm Audio-Out Socket, but the faultless HDMI-Out which Samsung seem to do better than anyone else out there. Bar none.

I live my digital life off of Cellular Data. When I want to watch stuff on TV, I have to use terrestrial or pay to stream data across Vodafone or cook up some system whereby I can poach Wifi when I'm in it, save data to a device and then plug it in to my TV to watch it. I love watching films. By careful selection and waiting for bargains, my Google Play Movies collection is now up to 200, plus various TV Show series. At any time, I might fancy watching any of that - and I really want to watch it on my TV.

I've tried using the Projector Mod on my Moto Z-series phones, but it really isn't very good. It's very dull and needs pitch black to make it usable. Then there's the phaff of setting up a screen or white wall etc. So I soon got fed up with that solution. No, back to other phones.

The Nokia 8 Sirocco will output to HDMI with no problem, but it only has 128GB of storage and no microSD Card slot. The Razer Phone is supposed to output to HDMI but try as I might, I can't get it to work properly. It just freezes up. Into the bargain, the Nokia 8 Sirocco won't allow for charging on a Qi pad whilst anything is plugged into the USB-C socket. It suspends it. As it does, we've found out this weekend, with the LG V30.

So, you see - it seems that the Samsung phones are the only ones which tick all the boxes. The Galaxy S9+ has 128GB of Storage, microSD Card expansion, it allows charging on a Qi pad whilst it's playing and will hold all the data I want. It has become my entertainment centre in my pocket with a 400GB microSD Card I have 528GB. My Google Play Movies stuff takes about 400GB of that leaving me 128GB to play with for downloading Netflix/Amazon Prime Video/BBC iPlayer stuff as it comes along. I'm also able to download Pocket Casts video podcasts for offline viewing.

It's an expensive solution but I can't see a cheaper one for my particular use case - well, it could have been an S8, I guess - but strangely not an S7 - or a Samsung Tablet - and there's also future-proofing to consider. I have stripped all the software off the phone except the ones I can't take off and the ones needed for Media (obviously) and run the device in Airplane Mode all the time except for when I'm out poaching Wifi. It's clearly a waste of a great phone in many people's eyes, but I hate it as a phone anyway, so nothing lost, and it's doing a job - and if I do want to use it out and about, has decent enough speakers to watch stuff on the screen.

If the Razer starts playing ball and doing what it is supposed to I'll maybe think again, flog this and use that. But for the meantime, this is my solution!
- October 22, 2018