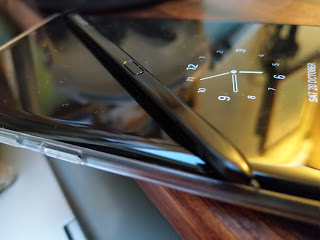 Apart from speakers, the other special aspect of the Samsung Galaxy Note 9 worthy of mention is of course its main USP - the stylus. Or S-Pen. The shortcut verdict is that it's incredibly clever, fun and addictive but you've got to really have a business use for the productivity features, an eye for artwork in drawing and colouring or merely a fascination for all things tech and gadget.

The S-Pen sits in a hole in the bottom of the phone and has a spring-loaded mechanism to get it in and out. It's flush with the body of the device and some need a fingernail to execute the action, especially if the phone is in a case with close-fitting apertures. The pen is supplied in different colours for different phone colours but this one is black for black.

It's about 3" long, is very slim with two facing flat sides and two facing rounded and has a button part way down one of the flat sides. The pen has power but charges itself whenever it is put back into the phone and charges up really quickly - minutes - from the phone's battery. You can check the state of the pen's charge in the S-Pen Settings.

The first thing you're likely to notice when you pull out the pen is what looks like a blackboard when the phone is off, ready for you to scribble a quick note. When done, this is saved to Samsung Notes on the phone and if you have set up a Samsung Account and given it permission, to their cloud too.

When you fire up the screen, you'll see a semi-circle of buttons around what they call a Floating Icon employing what they call Air Command. Hold the pen close to it and you'll see a little dot which moves as you move the pen. The semi-circle of buttons can be assigned to pretty much whatever App you like and is installed, but it makes sense to assign them to Apps which you're likely to use with the pen. Then it's a question of tap-to-launch!

If you don't want to see the Floating Icon cluster, you can drag it off to the top of the screen and bin it. You can also move it around the screen and place it where you like it to use. Want it back? Float the pen over the screen and tap its button once. It comes back! If you don't want to see it and prefer to launch apps the old fashioned way, you can switch it off altogether in S-Pen Settings. You can also assign in the settings the action you want to execute when you take the pen out. Create a Note (as described above) is the default but you can also assign it to launch the Floating Icon or get it to do nothing.

The button on the pen can be assigned to various actions assignable in each supported app. For example, in Media Playing apps you can assign it to Play/Pause with a quick press and Skip a track with a long one. In camera, you can use it to fire the shutter with a quick press, switch cameras from front to back with the other. You can launch Google Assistant with it, as another example, which means that you can interact with it from across the room. How about using it in Chrome Browser? Set the short click to scroll down and long to scroll up. Works brilliantly well. Or short to go Back and long to go Forward. If you put the pen down and the screen times out, you can press the button again to wake the screen. There's even a setting in there to alert you if the phone moves too far away from the pen. All clever stuff and great fun to play with, or indeed be productive with.

Talking of which, there are of course various supported Samsung Apps supplied which make the most of the pen input including, as I said, the Samsung Notes one. Scribble away on the screen in a Note, insert images, text, paint and draw using a range of pens and brushes - and save the note as a Samsung Note file, PDF, Image or Text. You can then Share it with whatever service you have on the phone in the usual way. Better than the old days when I tried this when there was no hookup at all with anything outside of Samsung's apps and services.

Talking of painting, there is an App called Colouring where, you guessed it, you get a range of drawings which you get to colour-in. Lots of brush and pen sizes to play with, zoom in and out to make it easier to hit areas, use the fill function if you can't be bothered to colour etc.

The Translate function on the fly is amazing to use. Set the language you want to translate to, head for any text on the screen, hover the pen over the word and up pops a window with the translation with a direct hookup to Google Translate if you want it. It works brilliantly fast and amazingly helpfully for all sorts of social situations and business applications.

Can't see the screen elements clearly enough? Launch Magnify - a virtual magnifying glass which floats a square following the pen's nib over the screen to show things bigger. Or how about Smart Select when you can Cut a lump of the screen, capturing text, animations, images, whatever really, then use the Capture Text to get the text out to share or just share an Image in the usual way across the other services you can access via installed apps. Or create a little video of you drawing something - a Message via Live Messages - then sending it to a friend and allow them to watch it unfold just as you drew it, GIF style.

There are lots of bells and whistles with this pen, lots of fun to be had and I wouldn't knock it. Laying aside the cost of the device, this is gadget-heaven for those so inclined and I could see myself using it routinely if I had one. Not only to do all of the above, and more not covered here, but also just for everyday use getting around the UI, poking the screen keeping fat fingers out of the way and entering text via the handwriting recognition window available whenever you use a text field. This works incredibly well - even when I was purposely trying to fox it!

It's a fabulous piece of kit and system for those could afford to buy a Samsung Galaxy Note 9 (and live with all the other trappings of using a Samsung phone) which might make the difference for someone toying with the question of Note vs. S9+. There's not really much difference in price, at least RRP, and if I was buying one brand new, I know which I'd choose.
- October 20, 2018