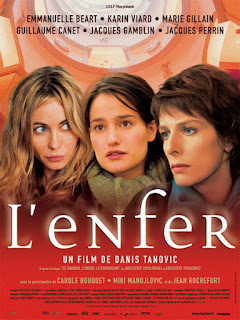 I'm back on my European cinema kick here, with a 2005 art-house offering directed by the Death in Sarajevo man, Danis Tanovic. Based on some of the Heaven, Hell and Purgatory writings of Krzysztof Kieslowski (Trois couleurs, Dekalog, The Double Life of Veronique et al) the story tells a modern tragedy in love and misunderstanding, based around the lives of three estranged sisters.

The first part of the tragedy is when the three sisters' father is sent to prison in Paris when he is caught in a room with a naked young man in his charge. We find out later that this was not all it seemed but that no opportunity was afforded the man to escape the wrath of the court. Time passes and the three sisters have grown up, but because of the tragedy and resulting actions on the father's release from prison, have no contact with each other.

Sophie is married to a photographer with whom she has two children, but he's cheating on her. When this is exposed, more tragedy ensues for all involved. Anne is a student who had been having an affair with her tutor, but got pregnant - with tragic consequences for all. Céline would like to find love but doesn't and is the only one of the three who has contact with their mother, now in a care home, who she visits periodically. The boy involved with their father's case, back in the day, is now trying desperately to reveal to the family his part in the father's downfall, to rid himself of the guilt. Céline misinterprets this as amorous advances, which leads to further tragedy!

The film portrays layers upon layers of tragedy, not only in the story itself but also in the imagery it offers, depicting tragic scenes in nature often, but also ultimate glimpses of hope, colour and beauty. The disturbing history of the family, the current crises of each arm of the family, the situation of the mother in a care home - would make you think that this is just a European filmmaker playing pretentiously with the audience's emotions - and indeed there are many clichéd art-house trappings which have been fallen into along the way. But that doesn't take away the fact this is a beautifully crafted film full of interesting imagery, lovely photography, excellent sets and fabulous lighting. As a work of art, it's a joy to watch.

How deeply the viewer wants to delve into the analogies relating to Dante's living hell or Greek Mythological Medea is up to each. It's certainly there for those who wish to, and you can just see classrooms full of students being taught the deeper meanings in Media Studies or the like! For me, I like to see it at face value, a story about people in a social situation which could well happen. The effects of actions on the lives of others, the impact of saying, or not saying, the right things at the right times to smooth troubled waters and how human nature often destines itself towards tragic outcomes. Some people's hell.

The key actors do a grand job. Very convincing, though at times directed towards the purposefully theatrical. The very attractive Emmanuelle Béart (Un Coeur en Hiver) playing Sophie beautifully, pouting to the last(!), Karin Viard (Delicatessen) as Céline, Marie Gillain (Mon père, ce héros) as Anne and (not very well made up to look old) Carole Bouquet (For Your Eyes Only) as the mother.

If you're a fan of Neeson, Reynolds, Willis and Gilson you're going to hate this film! The pace is slow for the purpose of musing and digestion. Move along to the popcorn stand for lighter consuming! The rest of us can hopefully grab much from the experience. I don't pretend to understand all the deeper meanings on offer here and maybe I'm under-qualified to review such films, but I have been able to enjoy it and would suggest that, approached with the right frame of mind, some folk reading this might take something enjoyable and meaningful away from a viewing.
- May 16, 2019