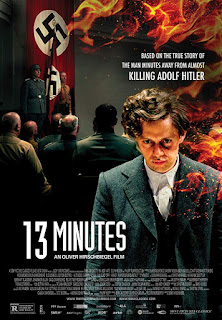 This 2015 film from the German director of Downfall Oliver Hirschbiegel depicts the true story of Georg Elser who single-handedly in 1939, seeing what was coming, attempted to change the course of events in Europe by assassinating Adolf Hitler.

Hitler was at the height of his power in 1939 and had convinced much of the population that his world-view was right - and the country's people raised up in support. Georg Elser was a pacifist who believed that nothing could ultimately be achieved by violence and that if Hitler was allowed to go on, not only would Germany be destroyed by other powers but that huge numbers of people would lose their lives.

Elser did not belong to the opposition party, so avoided being drafted by Hitler as an undesirable and into forced labour. He was a simple man, local worker and musician. A free spirit who just wanted everyone to get along with everyone else nicely. What is presented here is the story largely in reverse, starting with the bomb exploding, which sadly missed Hitler by 13 Minutes due to a schedule change, Elser's arrest - caught pretty much red-handed, his treatment by the Nazi staff and large chunks of flashback showing his life events leading up to the attempt.

Parts of the film make for difficult viewing as we see how the officials treated Elser, Hitler himself believing that no man could have done this himself and leaning on his staff to uncover the ring of people who Elser was in league with to carry out such an action. As the staff on the ground interrogating begin to realise that Elser was indeed telling the truth and was working alone, it still didn't wash with Hitler who wanted to string more than just one man up for the crime. The staff are forced to become more and more irrational with pressure from above to find the others, who don't exist.

Christian Friedel, who played the School Teacher in Michael Haneke's excellent The White Ribbon, depicts the role of Georg Elser quite brilliantly, demonstrating all the emotions that most of us can only imagine at time of crisis and equally well the happy-go-lucky musician during the more liberated times. Burghart Klaußner is also an actor from, amongst many other projects, The White Ribbon, and plays the frustrated Nazi with menace and sympathy. Katharina Schüttler is Elsa, Elser's lover and supports convincingly.

The director does an excellent job pulling the threads together, keeping the flashbacks from being an annoying foray into the present and minimising the irritating use of handheld camerawork. The sets are well chosen, from the grizzly and threatening interiors of the Nazi buildings to the carefree rural village from where Elser hails. Photography is well thought out and executed, keeping the audience focused on what matters. German dialogue, thankfully, with subtitles rather than English-speaking actors putting on German accents!

It's not an easy watch at times, but as is often the case with films like this, what carries it for the audience is the knowledge that the story is a true one and (most of) these things actually happened. I say most of, as there is a waiver at the end saying that the events are true but some of the background of Elser's personal life may have been changed. Which is a shame, but only drives me to now go and find out what was added or removed by researching the facts. Highly recommended viewing.
- May 08, 2019