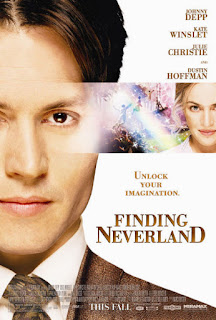 This 2004 film is supposed to have depicted the life of J M Barrie and the events surrounding his creation of Peter Pan in 1903. As with most 'based on' films, when you dig deeper you find more than meets the eye - and this is no exception. Having said that, this in itself is a wonderful fantasy creation in its own right and is worth a viewing.

The story starts with James, the struggling writer who's under pressure from the owner of a theatre to come up with a play which is going to fill seats. One day, by chance, he stumbles on the Llewelyn-Davies family headed up by the widow Sylvia and her four children who quickly become taken with with the out-to-impress Barrie. You could probably at this point see where this is going even if you didn't know, but there is a twist and turn to come which means that the story ends up not quite as expected.

Things get complicated when we discover that actually James is unhappily married to Mary (Radha Mitchell) and he spends more and more time with Sylvia and her kids. They get even more complicated when Sylvia's mum (Julie Christie) tries to drive a wedge between everyone else's happiness. This is where the story takes off and James starts to explore his own imagination taking the kids along with him through fantasy and adventure, culminating in the creation of the Peter Pan play.

Sylvia is played by Kate Winslet. She's playing this by the numbers much of the time and really doesn't seem very interested in the project, even in the later emotional stages. As usual though, even not trying very hard, she's more than capable and convincing, just not sparkling. The theatre owner is played passively by Dustin Hoffman and although he doesn't have much screen time, what scenes he has, he owns. Johnny Depp plays James beautifully as we see flashes of Capt. Jack Sparrow in amongst the fantasy and playing, along with a Scottish accent! His performance is captivating and he remains one of the most flexible actors of his generation.

There are also small parts for a range of actors popping up here and there. Toby Jones, Paul Whitehouse, Kelly Macdonald to name but three and everyone seems like they were having fun in the making. The four boys performed excellently, particularly the youngest played by Freddie Highmore who had the most demanding role and had to demonstrate the most ability, particularly within some emotional scenes.

The sets are created to perfection, depicting 1903 theatreland London, wealthy homes, country retreats, parks and streets. They are shot interestingly and in keeping with the theme of the film, often sweeping majestically under doors and through windows, reflecting magical flight. Director Marc Forster (Monster's Ball, World War Z, Quantum of Solace) has done a super job pulling it all together and maintaining an atmosphere supportive of the story.

Many of the links and proceedings are not in keeping with what the truth of the situation was, we know. People who would have been around at the time, the widow's husband not yet dead, James basing the whole Peter Pan thing around the death of his brother, not one of Sylvia's kids. You could pick holes with the facts, or you could just enjoy the creation and lose yourself for an hour and a half in a beautifully created fantasy. It's a super film, with a festive feel, which I'd recommend very much for a quiet Sunday afternoon.
- December 24, 2018