From the Land of the Moon (Mal de pierres) 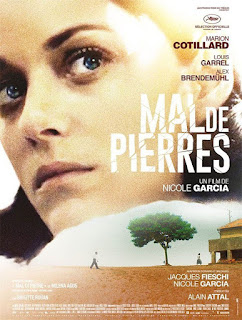 Nicole Garcia is a French actress-cum-director and writer and has been instrumental here in creating this 2016 film based on a short story by Italian writer Milena Agus. The setting has been switched to France (from Italy) and story tweaked for the big screen.

It's the story of the troubled Gabrielle in 1950's rural France and covers her life from teenager to older woman as she negotiates love, insanity and her place in the world. She seems to have a screw-loose generally and since being rejected for love by her teacher earlier in life, starts to behave eccentrically, like a drama-queen. Her family are at a loss to know what to do with her, so pretty-much arrange a marriage for her. She makes it clear to her new husband that she is not interested and that he must be nuts to go along with the plan when she knows that there's a loveless/sexless life ahead for them both. For reasons of his own, he still complies.

Gabrielle feels horribly constrained by society's expectations of place, position and behaviour and just wants to live life her own way, or not at all. My thoughts at this point went to the plight of T. S. Eliot's wife Vivienne Haigh-Wood Eliot as depicted in the excellent film Tom & Viv as we discover that at least a part of Gabrielle's problems are explained by the undiagnosed kidney-stones from which she suffers. This does eventually come out and off she goes to a clinic in Switzerland for treatment. The treatment now seems archaic and puts me in mind of Alan Parker's 1994 film The Road to Wellville with Kellogg's health-farm!

She meets a recovering soldier at the clinic and falls madly in love with him. They spend much time together and she imagines a passionate and love-filled future ahead of them together. He's not doing too well though and it's not clear how long he'll be around to enjoy it, even if she was able to get him to run off with her. He then abruptly disappears one day and she returns to her husband. She announces that she's pregnant and tells her long-suffering husband that it's not his and is the result of a passionate affair at the clinic. She writes to the soldier every day for years. He never replies. She settles into a traditional life of wife/mother and I'll say no more in terms of plot as this is where some reveals and flashbacks make the viewer realise that maybe all is not quite as it seemed, nor how it is now.

The visual impact of the film is significant. Photography of interiors and colourful landscapes are well thought out and executed in the way it seems only European cinema can do. It is, at times, a work of art in this respect and as is often the case, many frames from the film could make a fine picture for the wall. The sets are very typical rural France as you'd expect in the hot summer in the villages, much wooden furniture and bare upholstery, dark rooms with small windows, shuttered to control heat - think 'Allo 'Allo! Excellent atmosphere created by the use of silhouette, lighting and shadow.

The two leads play their parts very convincingly, though maybe it would have been an idea to not have to age the very experienced Marion Cotillard (La Vie en Rose, Contagion, Midnight in Paris) through quite so many years and use a younger actress for the teen! The less world-famous Alex Brendemühl plays the husband with style and captures the quiet and passive man nicely. The film is a thoughtful one which could so easily have meandered off into Lady Chatterley territory, but it holds itself back, applying a smart edge. A moving drama but also, as it turns out, a bit of a mystery with some twists, turns and reveals along the way. Recommended.
- August 11, 2019